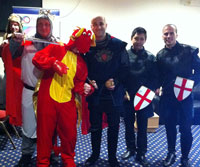 On Friday 16th October, Frettens hosted a rugby themed quiz night at Chapel Gate in aid of Macmillan Caring Locally. Teams from many local businesses including Frettens represented the nations through to the finals in the rugby tournament. All the teams were encouraged to dress appropriately for their chosen nation and a prize was given to the best dressed on the night. Despite their defeat in the actual tournament, England came out as winners represented by Linsar UK Ltd. We were astounded by the amount of effort that people put into their costumes which added to the fun atmosphere on the night and made the room extremely colourful. 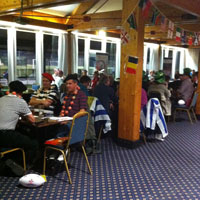 The quiz consisted of several rounds including Music, Food & Drink, Sport and Film & TV rounds and all questions were relevant to the nations taking part. At Half-Time, refreshments were served and we all enjoyed a curry to fit in with rugby tradition! 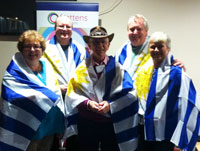 The Second half saw rounds on Rugby (of course!), Geography, a Picture round and  General Knowledge. Mobile phones were strictly forbidden with the threat of the sin bin for any who dared to cheat! Our social committee comprising of Christine Chant, Heather Varley, Holly Doick, Louise O'Connell and Andrew Guilfoyle were the referees for the event.

At the final whistle, rather fittingly the Macmillan team (Uruguay) were crowned winners with 74 points out of a possible 100, closely followed by last year's quiz winners Saffery Champness with 71.

It was a thoroughly enjoyable evening with a fantastic total of nearly £700 being raised for our Charity of the Year Macmillan Caring Locally. A big Thank You to all those who took part, dressed up and kindly donated to the raffle draw.

For more photos of the teams that took part go to www.facebook.co.uk/frettens

"It was a thoroughly enjoyable evening with a fantastic total of nearly £700 being raised for our Charity of the Year Macmillan Caring Locally. A big Thank You to all those who took part, dressed up and kindly donated to the raffle draw."