Cameron named Apprentice of the Year

Cameron Hearn was named Dorset’s Apprentice of the Year at the Dorset Chamber Awards on Wednesday. 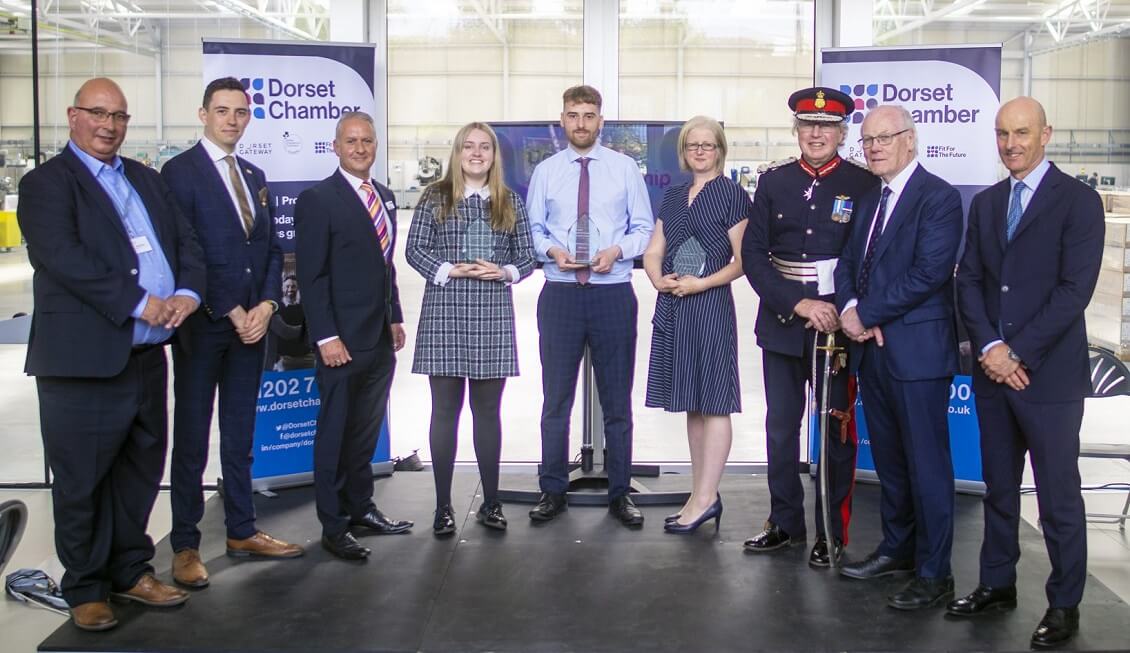 He was presented his award by the Lord-Lieutenant of Dorset, Angus Campbell in an awards ceremony at the impressive new Superior Seals Academy in Ferndown.

Cameron was one of four finalists on a shortlist for ‘Advanced Apprentice of the Year’, including apprentices from a variety of industries across the county.

Cameron on winning Dorset Apprentice of the Year

“I am very pleased, albeit a little surprised, to have won the advanced apprentice of the year award. It’s great to be recognised for the hard work I’ve put in, both with my company and the college, during my 16 months so far.

I’d like to thank the Dorset Chamber for considering me for this award, as well as Bournemouth & Poole College who’ve been integral to my learning.

I’d also like to appreciate Frettens, who’ve not only been so supportive; but have also decided to take me on in a full-time position after my apprenticeship has finished.

Lewis Barr and Jenny Williams in particular have made me feel part of the team since day one and have been fantastic mentors in my career so far.”

“We are so incredibly proud of what Cameron has achieved during his apprenticeship with us. He has become an integral part of our marketing team and already made some incredibly valuable contributions to our marketing efforts.

It has been real a pleasure to work with him and watch his skill set develop throughout his apprenticeship and I am looking forward to working with him as we continue to grow the team.

I have always been a huge advocate for apprenticeships and see them as a brilliant way to grow a team. I don’t think it’s an over-statement to say that Cameron has learned as much in 18 months with us as he would have on a three-year degree course in marketing. He has gained a huge amount of genuine practical experience and hasn’t amassed tens of thousands of pounds of debt, all while earning a salary and developing those all-important soft skills that we value so highly.

It was a privilege for the marketing team to be at the ceremony with his Mum to see him collect his award and celebrate with a few drinks afterwards.”

Apprentice of the Year Awards Ceremony

The first annual awards were held at Superior Seals’ cavernous and modern new facility in Ferndown and they sponsored the inaugural award.

Tim Brown, Director of the business, spoke passionately about the how apprenticeships have been an integral part of their business success before introducing the awards winners with Ian Girling, CEO of Dorset Camber of Trade and Commerce.

Cameron completes his 18-month apprenticeship in Digital Marketing at the firm in July and will become a full-time member of the team as a Content Marketing Assistant.

Frettens will be recruiting another Digital Marketing Apprentice through Bournemouth and Poole College to join the team from September. To find out more, please get in touch with Lewis Barr.